The weather and climate in Puglia

Puglia is in the middle of the Mediterranean Sea, and that’s why its climate is… typically mediterranean (have I reinvented the wheel?). Consult a map to see the exact location of Puglia in the Mediterranean Sea or read my post Where is Puglia in Italy?. I will now tell you exactly how’s the climate here, in Puglia, what’s the weather like as well as the best parts of the year during which you can come to Puglia and visit it, from Gargano, through Valle d’Itria and until Salento. 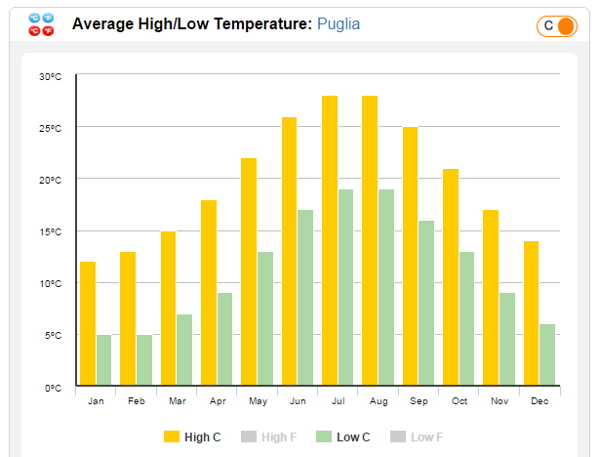 Summers are generally hot, aired and dry, while winters are mild and a bit rainy. However, you should consider that Puglia is a very long region, thus it has many, slightly different microclimates within itself. To the north, there are the only mountainous areas of the Gargano and there, of course, the weather is a bit more harsh in winter. Going south, there is the Tavoliere, a wide, flat area that leads to the Murge, the hills among which there is the Valle d’Itria. In the far south, there is the Salento, a basically flat area, execpt for the area towards the tip of Capo di Leuca, where there are the Serre Salentine, small uplands from 100 to 200 metres of height. 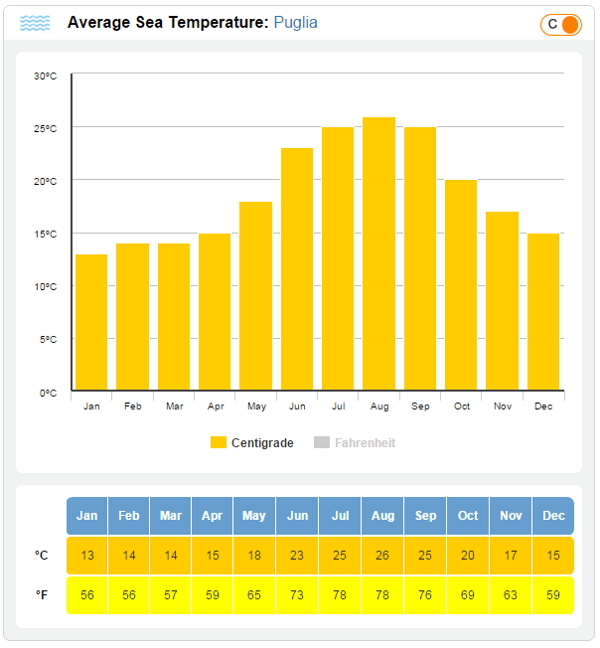 There are, therefore, some differences of altitude, consisting in differences of temperature as well. The hottest temperatures are recorded in the Tavoliere, near Foggia, and in Salento, where summer temperatures can reach 40 Celsius degrees (it’s hot in the other areas as well … ). The special feature of Puglia is that, being constantly surrounded by the sea with its almost 500 miles of coastline, it is the region with an essentially Mediterranean climate also in the hinterland. If you come here in July and August, the climate is very hot, while in June and September the temperatures are lower, but still suitable to go to the sea and take a bath. The months of April, May and October ensure more pleasant temperatures, ideal to go for a trip during daylight without that annoying summer heat, even if in October it starts the season of rains (however, I take my bath in the sea in the first days of October as well). The one thing you will hardly be able to see is the snow … but I think you already know that, otherwise you would not be looking for information about Puglia. Well, where I live, in Salento, it never snows. I almost do not remember the last time it snowed, since it was a very long time ago and it melted shortly after! On the Murge, however, it is more likely to snow, as well as on the Gargano and in the Umbra forest. If you need further information, please contact me.

The previous average high/low temperature and average sea temperature in Puglia are published in holiday-weather.com